For this reason I bow my knees before the Father, from whom every family in heaven and on earth is named, that according to the riches of his glory he may grant you to be strengthened with power through his Spirit in your inner being, so that Christ may dwell in your hearts through faith—that you, being rooted and grounded in love, may have strength to comprehend with all the saints what is the breadth and length and height and depth, and to know the love of Christ that surpasses knowledge, that you may be filled with all the fullness of God.  Now to him who is able to do far more abundantly than all that we ask or think, according to the power at work within us, to him be glory in the church and in Christ Jesus throughout all generations, forever and ever. Amen. (Ephesians 3:14-21). 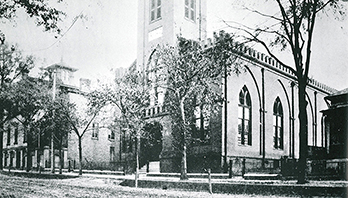 Our congregation can be traced to the First Presbyterian Church of Montgomery, which started in 1821 when a group of like-minded believers began to worship together. With their Baptist and Methodist brothers and sisters, they shared a public facility in the frontier town of Montgomery, each congregation meeting for their own worship, and yet sharing a common vision for seeing Christ rule their lives in their new hometown.

In 1824, our Baptists brothers put up their first building – six months after we put up ours! (Our Methodist brothers relaxed, took their time, and didn’t put up their first building until the 1880’s.) Accordingly, following the civility of southern values, First Baptist and First Methodist gracefully allowed us to refer to ourselves as First Church, Montgomery. First Presbyterian’s ministry grew from there.

In the 1880’s the black members of our church expressed their desire for a separate church, closer to where they lived. Frankly, it was just a bit too burdensome traveling on foot to get to worship, etc. Our church agreed and planted her first daughter church for those members. In the early part of the 20th century, another group of our members, living in the new suburb of Cloverdale, asked for their own church for similar reasons. And while at first this wasn’t supported, in time it was and in God’s merciful providence our second daughter church was established, Trinity Presbyterian. In the ensuing years, more Presbyterian churches were planted in and around Montgomery. Each descends from the original First Church.

In the 1970’s, after helping to start our current denomination (Presbyterian Church in America), First Church began to experience difficulties, and then decline. To be sure, this was a common experience of many churches in that era, but it was particularly hard for many in Montgomery, both members and non-members, for whom olde First was a part of their history, their heritage.

After decades of seeking God’s leading, in 1999 the elders of First proposed to the congregation that the church seek to sell their downtown property and move to a new location for a re-birth of the ministry. At the same time, God was giving a renewed vision to our sister church, First Baptist, for reaching the downtown community. A blessed providence followed and First Presbyterian sold their buildings to First Baptist. Out of difficult circumstances, God’s kingdom expanded. 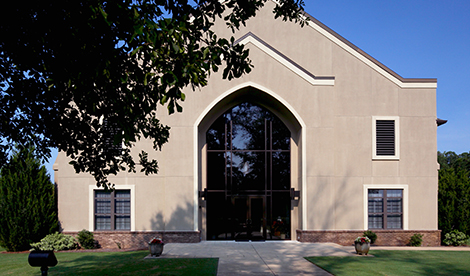 Moving to the new location in 2000, the continuing congregation recommitted themselves to seeing the ministry of the gospel restored at First Presbyterian. With a new building erected and newer members joining, things looked up. Yet the fullness of renewal hoped for did not materialize. It was as if there were some spiritual forces stopping First from moving forward.

In 2008, the elders determined to seek the help and advice of fellow elders from a sister PCA church in Birmingham, Briarwood PCA. The congregation followed their elders’ lead and, in 2009, First Presbyterian Church of Montgomery began its participation in the renewal ministry of "Embers to a Flame". Built upon the church renewal paradigm expressed in Revelation 2:5, this process involves review and renewal using ten biblical strategies for re-establishing a spiritually healthy church.

Yet this too was slow to launch.  It was not until 2016 that God determined to touch the hearts of the congregation at First Presbyterian Church.  In the fall of that year, the leadership drafted and approved a Resolution of Repentance.  In 2017, after much prayer, the members of the congregation personally signed the resolution, which now hangs in the halls of our church for all to see.

In November of 2017, a project was started to build a memorial monument to the oppressed of the past.  Currently, this project is in the funds gathering stage.  For more information about this project, please visit the GoFundMe project HERE.

For a little more information about the property on which the church building sits, as well as why we finally changed our name to "The Church at Chantilly," click (HERE).