For nearly two centuries, our official name has been the "First Presbyterian Church of Montgomery," but the official name of a church body and what people refer to her by are often completely different. Consider Revelation 3:1-22, when God refers to seven specific groups of believers based on their locations. Today, churches are no different in this regard and many are referred to by their location, such as "First Presbyterian Church of Montgomery", "Bell Road Baptist Church", "Vaughn Forest Church", or "Dexter Avenue King Memorial Baptist Church."

Historic First Presbyterian Church was originally formed in the Fall of 1824 and worshipped for over 150 years in downtown Montgomery. However, in 2000, the church moved eastward to her current location near the corner of Vaughn Road and Chantilly Parkway. This area was once associated with a large plantation named "Chantilly," which was named that by one of the owners, Dr. Taylor, because of the family's strong ties to France.

So, while our official name was the "First Presbyterian Church of Montgomery," the church was no longer located within the Montgomery city limits. Her current location was (and still is) in a suburb of Montgomery known as "Mount Meigs", has a mailing address of Pike Road, Alabama, yet has been associated with downtown Montgomery since 1824. This presented something of a problem, not so much in the formal name of the church itself, but in how one refers to her. While we were the "First Presbyterian Church of Montgomery," we sometimes called ourselves "First Church" as an abbreviation to our formal name, as well as the fact that she was the first formally organized church in the Montgomery area (First Baptist of Montgomery formed less than a year later). Among those that knew the local area, you might have also heard her referred to as "The Church at Chantilly."

This name, "The Church at Chantilly" became official in the Spring of 2017.

(Note:  The following is based on information about the original "Chantilly" plantation from the Montgomery Botanical Gardens).

The house itself was begun in 1835 by John T. Ashurst, a landowner and prospering young planter. His father, John Ashurst, brought his family to the newly opened Indian lands from Virginia, by way of Georgia. He was said to have built the first frame house in Mt. Meigs. The evidence is strong that the younger Mr. Ashurst died rather suddenly in the midst of building and furnishing his home, in an 1837 malaria epidemic. One old lilac chaste tree, still on site, is said to have been brought from Georgia and planted by him. Invoices indicate that it was a very fine house for its day, and well furnished with expensive things, including two uncataloged paintings by Thomas Sulley.

Dr. Thomas Burge Taylor purchased the plantation in 1842 from a court-authorized estate auction for $1,750. Trained in a Philadelphia medical school, Dr. Taylor was part of a prestigious migration from South Carolina that settled in this area. In 1838, he married Harriot Pinkney Raoul. The Raouls were French Huguenots from the Charleston area. The Taylors were industrious, hardworking, benevolent, and inventive. About 1850, Dr. Taylor added two large rooms at either end of the back, as well as a long verandah around the sides and front. It is at this time, that the plantation began being called “Chantilly,” reflecting Mrs. Taylor’s French background and a connection with Napoleon.  Chantilly is a town in France (near Paris) that is renowned for fine porcelain, as well as for a certain type of delicate lace, both of which were made there. The place name is rooted in medieval Latin ("Chantileium"), as well as a Gallo-Roman personal name (Cantilius). 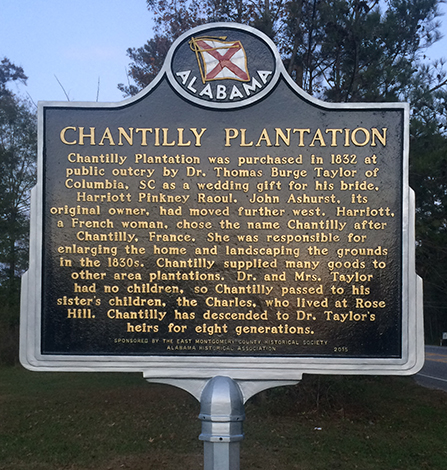 Mrs. Taylor is said to have installed the landscape with the aid of a French gardener from Charleston. The civil engineering task she undertook is very typical of the French style. The house faced north, atop a gentle slope, that fell away more to the east than the west. She divided the front slope into three 100 foot terraces, which were leveled into the hillside. The eastern side had to be filled in more than the western side so that the terraces would be level. The carriage drive rises gently from the lower level to the front of the house. Berms were constructed to the outside of the drive, between the middle and top terraces. The top terrace appears to have been for flowers and shrubs. The middle terrace, with flanking summer houses was covered with grass, and the lower level was supposed to be a reflecting pool, but due to a fluke of nature, it never held water! The topography of 2 acres was modified to accomplish the design, at one point, almost 5 feet above original grade.

The Taylors had no children and the house passed on to a nephew, William T. Charles, and remained in the Charles family for many years.  The Chantilly plantation is significant for a number of reasons, but especially because it was one of the best documented sites in Alabama.