Free of Guilt and Shame to Live in the Light

Free of Guilt and Shame to Live in the Light 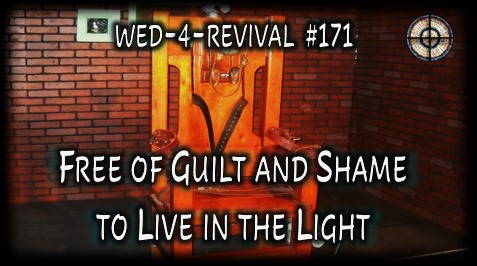 In witnessing, I run into deep-seated guilt combined with the conviction, “God will never forgive me”. A person rarely says, “Oh, I’m too wicked; God will never forgive me.” Instead, folks are deeply shamed by their guilt before God. Like Adam and Eve before one another, they try to cover their shame with their own efforts to hide from it:

Nothing in all creation is hidden from God. Everything is naked and exposed before his eyes, and he is the one to whom we are accountable. (Heb 4:13 NLT)

So in our witnessing, we need to keep in mind that all those we are trying to reach are loaded down with a weight of guilt that left to themselves, they can only try to hide from. We need address this need with Jesus!

A recent conversation I had focused on this need. The person asked whether God would forgive the worst person imaginable right before capital punishment was administered. This is a common hypothetical question folks ask, something that looks like it is either morbid curiosity, or more often a deflection from having to talk about the gospel. And this demonstrates that it is actually about their deep-seated guilt. If God would forgive such a person, then, the thinking goes, God would certainly be willing to forgive someone like themselves, hiding in shame from their guilt.

Answering this, I give two examples: 1) a real world one, and 2) a biblical one. The real world example I use is a well-known executed criminal of unarguable wickedness: Ted Bundy. Even the most anti-capital punishment activist will at least agree that his crimes were of the highest order of unmitigated evil and unredeemable wickedness.  I first bring up Bundy as an example of someone who, if God would forgive someone right before their capital punishment, never even in the tiniest degree did anything to deserve God’s mercy, including last-minute repentance.

I leave the description of Ted Bundy hanging right there: his evil wickedness nakedly exposed with no possibility of hiding from it. Then I turn to the biblical example, the thieves on the cross:

Two others, both criminals, were led out to be executed with him. When they came to a place called The Skull, they nailed him to the cross. And the criminals were also crucified-- one on his right and one on his left. (Lk 23:32-33)

Some translations use the word “robber” to describe these men, suggesting that they weren’t deserving of a death penalty. Yet the word used to describe them is better translated today as a murdering mugger: someone who makes his living lying in wait for innocent people, attacking them, murdering them, and them robbing their corpses. Not a one-time only criminal, such a person lived by a depraved indifference that marked him as one whose crimes were of the highest order of unmitigated evil and unredeemable wickedness.

Both of these men cried out to Jesus with a profession of faith. One, in his pain and despair, cursed and mocked Jesus, demanding that he prove himself to be the Messiah and save both of them from the agony of the cross (Lk 23:39). The other rebuked the first criminal for his lack of fear of God, and expressed a sentiment of repentance:

But the other criminal protested, "Don't you fear God even when you have been sentenced to die? We deserve to die for our crimes, but this man hasn't done anything wrong." (Lk 23:40-41)

He then expressed faith in Jesus:

There it is, an actual in-the-electric-chair conversion, a true on the lethal-injection-table profession of faith. Hanging on that cross, the switch had already been thrown, the poison was already pumping into his veins. All this criminal had before him was the completion of his death – and his standing in judgment before his Maker (Heb 9:27).

Did God accept this death-row conversion? Had the Spirit moved in this man, giving him the new birth, by which he then professed repentance and faith that flows from a saving union with Christ hanging on the cross next to him? Or were this man’s words, like the other criminal, just the words of worldly regret born of a heart that knows it is too late, but is going out with one last mocking cry of rebellion?

Jesus’ response makes it clear that this man’s less-than-a-minute-left-in-life cry was born of the Spirit (Jh 1:12-13):

There you have it! A man with the most despicable life imaginable, at the last possible moment of life, made a profession of faith, to which God said “yes”. He did nothing to earn this, nor could he do anything to prove his worth afterwards. Instead, an exception to the rule, this man was ushered from conversion, to immediate death, to judgment. There he found that his name was written in the lamb’s book of life (Rv 21:17), all his sins forgiven in the death of Jesus who hung on the cross next to him. Would God forgive the worst of the worst and the last possible moment? The answer is: he already has, and will do so again!

After showing this amazing gift from the biblical example, I return to Bundy. We can’t know for sure if anyone is saved (apart from the Bible’s testimony). Yet Jesus did say that we could (approximately) know who is saved by their fruits (Mt 7:16-20; 13:23). If a person makes a saving profession of faith, and lives for some period of time afterwards, they will necessarily, inevitably, grow in the fruits of the Christian life: faith/repentance that yields growing godliness (love for God) and holiness (living in obedience to him).

While we can’t know, yet, whether Bundy was savingly regenerated by the Spirit, his life after his profession of faith certainly suggests he was. Aside from the expressions of repentance, he also brought forth appropriate fruits, cooperating with police in locating his victims, that their families might bury their bodies (and other things). While not “proof” that he was saved, Bundy’s final days do indeed demonstrate that God is both just (Ted willingly went to the electric chair) and merciful (Ted sought to make what amends he could).

Some people want to quibble at this point with the Ted Bundy example, so I drive ‘em back to the biblical example, which cannot be argued against. I then apply the lesson to them and me: if God would forgive such a despicable person as these examples, surely he is willing to forgive despicable characters like you and me. Guilt can be removed; shame does not have to drive us into perpetual hiding. We can be free and live in the Light who is Jesus!

Dear Lord, no matter the lies we tell ourselves to momentarily feel better, we all know we are guilty, and so we want to hide from you in our shame. Forgive us for not believing that you are faithful and just to forgive all in Christ. Give us the joy of living in the truth that all condemnation is gone for those who are yours in Jesus. Then send us to tell others this glorious news. Oh Lord, give us lots of converts, freed from guilt and shame, living in your light!

More in In the Valley